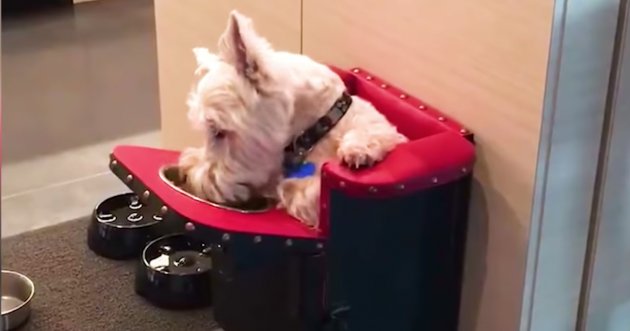 What was your first thought when you saw the image at the top of this page? Kind looks like a very privileged dog eating in a throne like chair doesn’t it?


But first impressions can be deceiving. This image is actually a screen shot from a viral video that’s been doing the rounds on social media (check out the video below). In my work with animals as an Animal Translator I see many animals with limiting illness and conditions so I decided to share this wonderful video about dogs on my personal social media profile.


Lots of people commented. But what I found surprising, was that almost nobody actually watched it. They didn’t bother to turn the sound up and in just a few short seconds, they had formed an opinion of the video that had nothing to do with what it was truly about. Many comments were critical of what they saw as stupid humans, spoiling their dogs.


Surprising? Maybe not, given that we live in a world of instant gratification, but I was shocked at how quickly people were making a judgment without taking the time to actually watch the video.


Because this video is not about pampered pups who have their humans twisted around their little fingers (or toes cause we’re talking about dogs here). In fact, this video was highlighting a condition called Canine Megaesophagus, a rare condition that affects dogs. Due to an enlarged Oesophagus, food cannot reach the stomach when these animals eat in the usual way.


The video was showing a wonderful invention to help these dogs to survive. When they eat in a vertical position, the Oesophagus shrinks allowing food to travel to the stomach and provide the nourishment they need. These seemingly luxurious chairs were invented to assist not only the dogs but also their owners. Without someone or something to hold them in a vertical position to eat, these animals will literally starve to death.


Why am I talking about this?


It has nothing really to do with the story behind the video but it’s a way to demonstrate how quickly we can jump to conclusions about what we see. Or think we see.


Is it laziness? Perhaps in some cases but it’s also to do with your amazing brain. It’s not your eyes that see, it’s your brain. And your brain is always looking for things it recognises. When it sees something it’s never seen before, it will search your knowledge and memory banks to find a match.


But there isn’t one of course. So it finds something that looks kind of similar, could be a match, maybe, and shows you that. It’s actually completely wrong because you don’t have all the facts but if you don’t take the time to find out, you will believe what you’re seeing. You might even tell your friends about the crazy pet owners who buy their dogs special chairs so their animals feel more human.


You’re seeing through the connections your brain has made instead of what’s actually going on.


And here’s the key point I want to make. Your brain is doing this all the time with everything! Not just with videos on social media. It’s doing it 24/7. All. The. Time. Without you even knowing it.


The brain is designed to adapt but unless it learns something new, it will continue to show you people, situations and experiences that match what it already knows. It has nothing else to go on.


It’s why when someone starts talking about their work in detail, you switch off. You struggle to understand. You have no existing frame of reference to match it to and so the person might as well be speaking a language that’s foreign to you. Your brain is desperately searching for something it knows and if there’s nothing in the conversation in front of you, it will distract you with something else.


And so we miss a lot of what goes on around us. We don’t hear the things people say to us. We misread people’s expressions, their body language and their intentions all because our brain is working hard to deliver a match to what it already knows.


Just like in the video. You see a dog in a plush looking red upholstered chair and draw your own conclusions. Perhaps unfair of me to choose that particular image but I wanted to get your attention and show you that not everything you think you see is the truth of something.


Take the time to look more closely, to connect more fully and to give people the benefit of the doubt. Your brain is simply replaying what it already knows and unless you actively search for the truth, you’re unlikely to find it.


Remember, not everything is as it appears.


We call all learn a lot from dogs in plush red chairs.